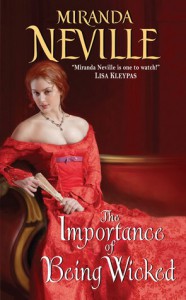 I was excited by the premise of this book. I love an "opposites-attract" story especially when it involves a starchy duke and a carefree heroine. This story, however, fell a little flat for me. The hero and heroine are definitely opposites but the attraction aspect isn't well explained or shown. It just magically happens that they suddenly are both having lusty thoughts about each other fairly early in the story. Even when I tried to mentally fill in the blanks on why they might be attracted to each other, I couldn't conjure up any tension.

I think part of the problem is with the Duke of Castleton. He's a 29 year old man with virtually no sexual experience or knowledge of sex. He appears to have no friends and it's as if he was just dropped into society after having been raised by prudish, austere wolves in some distant land. How could he not know that woman can experience orgasms or that they enjoyed being touched "down there"? Even if he had no first hand knowledge, save a very stoic mistress, wouldn't he have heard about such things from friends or books or by just being a participating member of society?

One saving grace about His Grace is that he is open with his feelings and some of the best moments in the book are when he's laughing at his own 'stuffiness' and declaring his feelings for Caro. And that leads us to Caro. She starts off as an interesting bohemian wild-child but her appeal quickly wears thin. Her adoration of her deceased husband crops up at the most inopportune times and it is a testament to Thomas that he continues to pursue her affections.

This is the first book in a series and there are several characters introduced who are likely to be featured the sequels. I've enjoyed other books by Miranda Neville so I'm hopeful that the next books in this series are better than this one.
Tweet
951 BOOKS