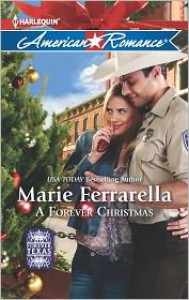 I was intrigued by the amnesia plot but this book is so full of cliches and predictable plot points that it was almost a DNF. I think the only reason I kept reading was to see if I guessed correctly.

In the first chapter, the heroine is fleeing in her car from an abusive man when it crashes just before she's about to run out of gas. Inexplicably, though, the car eventually explodes right after the hero manages to pull her from the wreckage. How a car with virtually no gas can go up in a fiery ball of flames doesn't seem to have occurred to the author. It was at this point I knew I was in for some lazy plotting and my suspicions were confirmed with the passing of each chapter.

It's set in a small town with the usual complement of characters who seem to populate every small town. Irascible but beloved diner owner, hunky doctor, earnest cop, intrepid mechanic etc. The hero (Gabe) names the heroine Angel because she can't remember anything at all about her former life. They quickly fall in love despite not knowing whether she is married. He is a cop but has terrible detective skills because it can't be that hard to figure out her identity in this day and age. Oh wait! The internet in the town is down so they can't search missing person databases. And her car has been burned to a crisp so they can't trace it back to the owner. Although it's apparently not too burnt for the town mechanic to figure out the brake lines have been cut. Adding to the fun, the town doctor has apparently been remiss in teaching the townfolk about safe-sex and pregnancy avoidance because our heroine, who just feels it in her bones that she's not already married with kids, has lots of unprotected sex with the hero and gets herself knocked up within the first couple of weeks. Cue the evil villain's arrival and anyone who read romances back in the 90's can pretty much write the ending themselves.