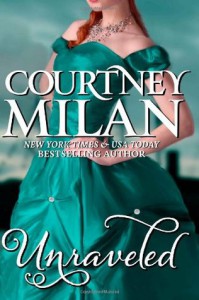 Wow. I'm not a big fan of the first two books in this series (Unveiled and Unclaimed) but Unraveled blew me away.

What a great, refreshing and unpredicable romance.
It hit all the right notes for me:

1. Damaged and lonely hero with credible reasons for being so and enough self-awareness to laugh at most of his eccentricities.
2. Smart and funny heroine who is a survivor and doesn't apologize for who she is.
3. No Big Misunderstanding that bogs down the progression.
4. No secret keeping. How amazing is that? Just when you think you're going to have to suffer through six chapters wishing secret would be told, the author turns it in a completely different direction. Five stars for that aspect alone.
5. No magic love pill that resolves all the hero's issues at the end yet there is still a nice Happily Ever After resolution.
6. Limited time spent on secondary characters and a mystery plot that doesn't overwhelm the romance.
7. Sarcasm. Nothing I love more than sarcastic banter between H/h.
8. Lots of touching "awwww" moments and sexy love scenes without devolving into purple prose.

My one and only quibble with the book, which keeps it from being a Desert Island Keeper, is the heroine's lack of direction and purpose. She's a survivor but doesn't seem to have any real dreams or aspirations of her own other than keeping herself and her ward safe. Does she want to pursue acting? Raise a family? It's never specifically said so maybe the author is leaving it up to us to imagine how she will fill her days after marriage.

I just wish there were a fourth a Turner brother because I want to be able to revisit Smite and Miranda.
Tweet
951 BOOKS